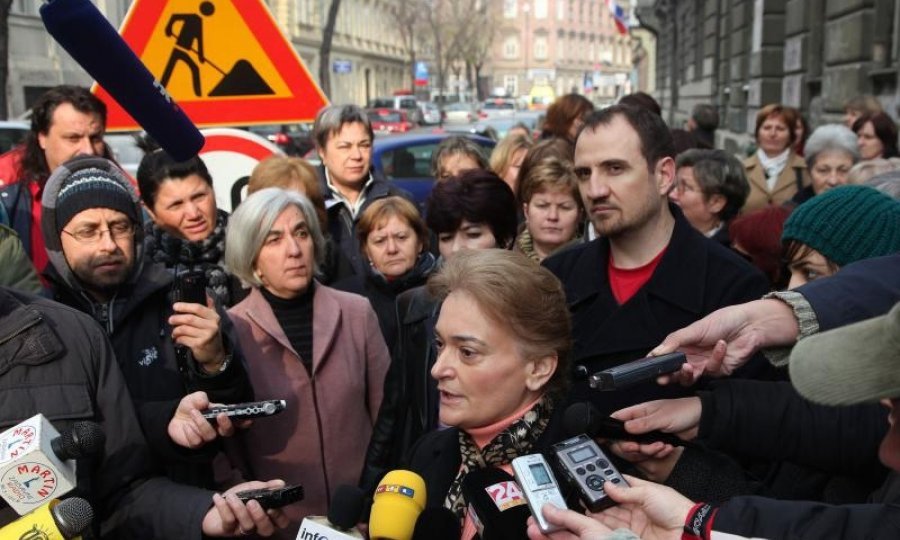 Representatives of the workers of the bankrupt textile factory Kamensko and of the non-governmental organisations The Right to the City and Green Action gathered outside the Chief Public Prosecutor's Office (DORH) in Zagreb on Tuesday seeking an answer to the question as to what steps had been taken against persons whom they considered responsible for the deliberate destruction of the Zagreb-based factory, notably the former CEO Antun Crlenjak.

The protesters were received by Chief Public Prosecutor Mladen Bajic and the Director of the Office for the Prevention of Corruption and Organised Crime (USKOK), Dinko Cvitan.

Teodor Celakoski of The Right to the City later said that Bajic and Cvitan told them that the relevant institutions were acting on their complaint, filed last December, and that some of its elements were already being dealt with by courts.

The protesters also wanted to know whether the investigation would be expanded to include those who they believed were behind Crlenjak, namely Miroslav Kutle, in whose Globus Group Crlenjak had worked, the co-owner of the EPH newspaper publisher, Ninoslav Pavic, and the owner of the Agrokor food concern, Ivica Todoric.

The protesters believe that the financial destruction of Kamensko was organised by Kutle so that he could get hold of a valuable piece of land in central Zagreb, and that Pavic and Todoric allegedly helped him in it by purchasing a fictitious firm called Dalta and paying Kutle millions for it although it was actually worthless.

The protesters see Crlenjak as the key person who could tell DORH and USKOK all about the involvement of Kutle, Pavic and Todoric in the case, but Crlenjak has not been questioned yet.

"In Croatia it is obviously possible to put a former prime minister in the dock, but not tycoons such as Pavic and Todoric because no one should touch the interests of the media, construction and commercial lobbies," Celakoski told reporters before the meeting with the heads of DORH and USKOK.

Celakoski said that Bajic and Cvitan had told him they were still waiting for a police report on the case, denying media speculations that the police wanted to investigate Pavic and Todoric while DORH and USKOK were protecting them. He said that Croatian tycoons were "smooth operators" who might even try to establish "a special relationship" with the next government to secure for themselves protection against criminal prosecution.