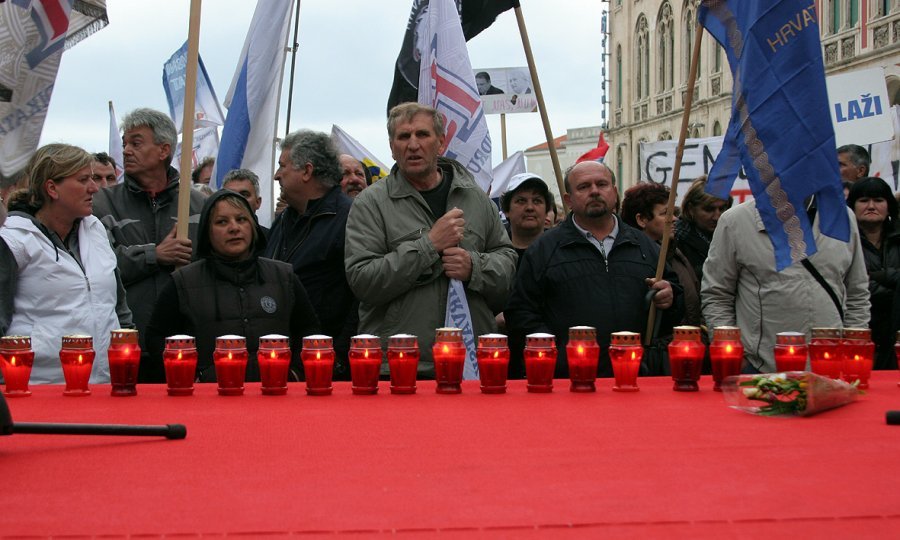 The Croatian Association of Trade Unions (HUS) organised a protest rally in the coastal city of Split on Wednesday evening at which protesters warned about a difficult economic situation in Split-Dalmatia County and harshly criticised the government for failing to meet election promises.

HUS president Ozren Matijasevic announced the signing of a new petition for the right to referendum.

According to the organiser, some 1,000 people gathered at the protest rally and lit 40 candles for 40 companies in Split-Dalmatia County which, as they said, were disappearing or had already disappeared.

Matijasevic called for a new protest rally in downtown Split on 1 May - Labour Day - when the 15-day signing of the new petition for the right to referendum would begin.

We need to gather the signatures of 10 percent of the electorate, namely 450,000 signatures, to be able to have a referendum be the key tool of direct democracy, Matijasevic said.

He asked the government to stop destroying jobs, saying that last month alone 12,500 workers in the food processing industry and the construction sector lost their jobs. He criticised Economy Minister Radimir Cacic, saying that he personally heard Cacic call the workers of Dalmacijavino parasites.

"I call on Prime Minister Zoran Milanovic either to replace Cacic or order him to stop with this practice," Matijasevic said.

Commenting on the government's recent decision concerning Croatian shipyards, Matijasevic said the government planned to meet on Thursday to discuss shipyards and called on members of the Zoran Milanovic cabinet to give guarantees under which workers' representative would be able to supervise shipyards' sales contracts.

The protest rally was also attended by the owner of the Samobor-based DIV company, Tomislav Debeljak, whose bid for the purchase of the Brodosplit shipyard has recently been accepted by the government. Debeljak told the press he arrived at the protest rally because he sympathised with the workers who lost their jobs.